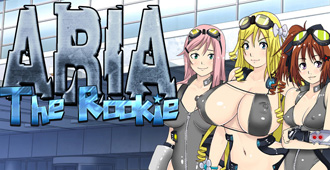 Probably long over due.
This walkthrough was copied directly from Hentaihead’s post in The Rookie page comments so people can see it easily and easily link to it. However I updated it with info on the scenes added after it was posted.

Day 1:
-start the game
-pick a name (doesn’t matter which one)
-After that pick the option “Some guy named Cain”
-Then pick “Holy shit those are huge!”
-Pick “Yes I am, nice yo meet you!”

So this the “universal” guide for you to be able to get to the H-scenes, from this point onward, your decisions will affect which scenes you get (you cannot get all of them in 2 playthough)

-Here you have 3 options (I recommend saving here, so you avoid the previous steps) this will decide which route you’ll follow, aka which girl’s you’ll get:
>”It’s perfect!” for the Luma route (the blonde)
>”Yeah they are pretty distracting honestly.” for the Lynn route (the pink haired one)
>”We probably should just get going.” for the Riley route (the brunette)

-Now choose “Can you have sex with me?” and then “I’ll go ask one of them” (this is the same for all routes)
>If you’re second answer is “Can you strip nude?” You’ll get a futa scene and you’ll be able to see the corresponding Day 1 scenes, but you’ll be instantly unable to get to Day 2, I recommend also saving here, if you like futas.

-Now you have three options, each will lead you to the corresponding girl, note that your decision here has correspond to the girl you picked from the previous options, otherwise you won’t be able to get the scene. Also, Luma will help you no matter what, but you won’t get the full scene.

-After all that jazz, you’ll go on some kind of mission:
-Pick “(stay out of it)”
-Then “Let him pass.”
-And then “Just following orders…?”
-You must pick those options in order to get to Day 2.

Later you will arrive back home and have the option to go out at night.
Going out will cause your character to be sleepy during a scene the next day which can unlock a scene with the teacher and is needed for other scenes that don’t involve one of the 3 girls on the team. If you don’t plan on unlocking scenes with one of the girls on the team this playthrough then choose you go out. I would recommend saving at this option.

If you are going for the the Lynn route do not apologize to Luma when you go out. If you do it will cause your character to have equal relationship between Luma and Lynn and you will end up with no ending scene.

Congratulations! You’ve successfully passed Day 1, now on to Day 2, this is a little bit trickier

Day 2:
-You’ll meet Phia (The redhead) at the entrance, along with the girl of the route you picked.
-She’ll ask you if you’d have sex with her.

Picking the other options in any case will cause you to not be able to view the final scene with the girl of your route.
But Phia she will show up later later in the day for a scene on a mission if you go alone.

-Now comes the tricky part, you’ll encounter 3 potential scenes before you get to the scene of your girl’s route. Picking any of this scenes will prevent you from the final scene with your main girl, so I, again, recommend saving here, just to be sure. I’ll be referring to the possible options as “Lie” and “Truth”, since it’s easier for me and you. (The “Lie option always ends with “…(lie)” and the “Truth” doesn’t have anything at the end). In a nutshell, lying will get you that specific scene, but will prevent you from the final scene with the main girl.

>Scene #1: If you lie, you’ll get her scene, but afterwards.
>Scene #2: Same as Scene N°1, but you’ll get the scene right then and there.
>Scene #3: To get this scene, you must’ve lied in any of the previous scenes, otherwise you’ll get an instant game over. I get this option you needed to have went out to get food the night before.

-If you didn’t lie in all previous occasions, then you’ll have full access to all the scenes.
-Now you’ll meet the futa nurse again, picking either option doesn’t affect anything to my knowledge. I’d go with the “Meh, easy enough” just to be sure.

-Now you’ll meet Lynn, if you aren’t on her route, you’ll just talk to her and meet Cain.
>If you’re on her route however, you’ll get to choose options. She works differently from the other girls, to get the scene, you must tell the truth. After this pick the “Well maybe I can teach you…” option, and you’ll get your scene.

+And that’s the end of Day 2!… and the end of the game. You will get the ending scenes if you are on Luma, Lynn or Riley routes.

~if you have any questions, or things that don’t seem to work, just leave a comment.

23 thoughts on “The Rookie Walkthrough”