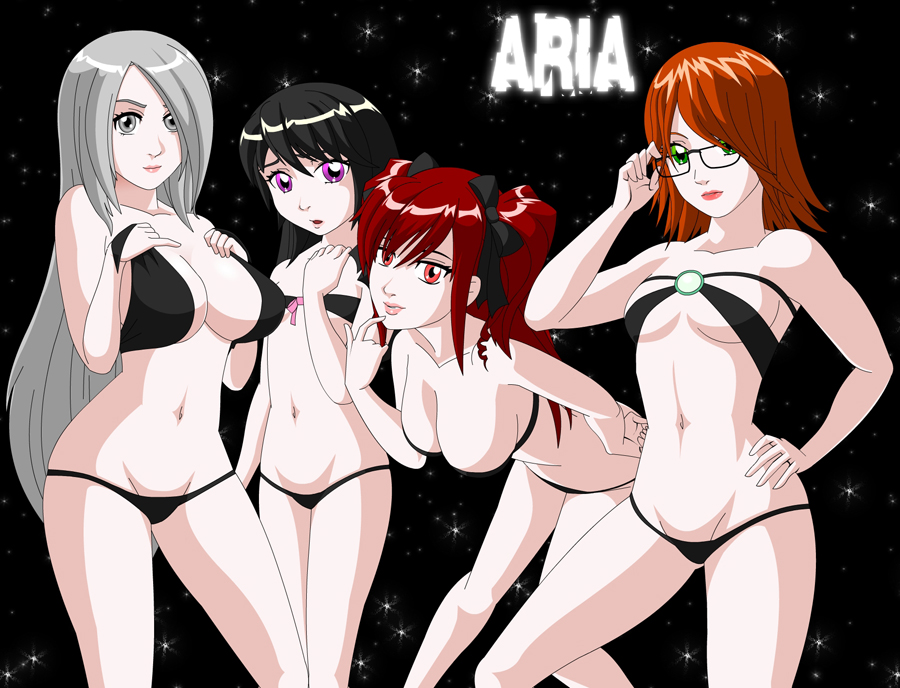 find the game at:
http://spiralvortexplay.com/svp/flash/advanced-rogue-intelligence-assault-aria/
full version of the game is on patreon: https://www.patreon.com/vortex00

An expanded version of the game is being created that expands on Amp’s storyline and sex scenes.

in ARIA you play as a team of special agent space operatives with unique abilities that work for a company
called GemCo. This special agent team is lead by Jeo, a highly skilled and powerful agent who has recently
gone rogue after being framed during a undercover mission at a school where he was under the alias name of
Jinru. Several GemCo agents are on the hunt looking for him, however Arielle who is rumored to be his
girlfriend, and leading his old team was the first to find him out in deep space. With Jeo united with his
team again, his plan is to battle his way back through GemCo and find the man who framed him.

This game features characters from Umichan Maiko Classroom Cheaters (UMCC) and is connected to the story in that game. 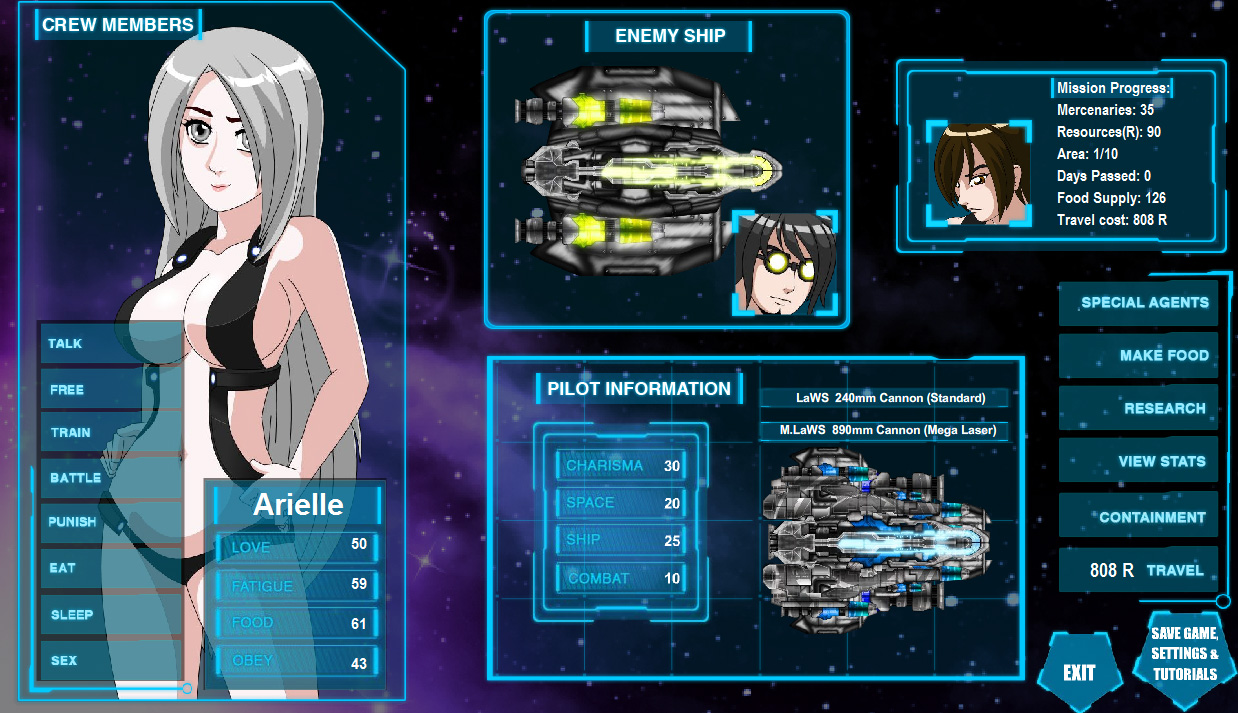 From the Crew Members panel to the left, you can assign orders, one at a time to each of the four girls by clicking one of the buttons from the menu. First is always Arielle, second is Phia, then TT, then Bri. Once the order is given to Bri they will attempt to go off and do those tasks.

Each girl has stats including Love, Fatigue, Food and Obey.

Love – how well the character likes Jeo. At first this activated passives once over 100. but I made those
passives enabled form the start so this stat is not currently used. Potentially will use it for updates to the
game where the girl will leave if the love reaches zero.
Fatigue – how tired the girl is out of 100. if fatigue is at 100 she will need to sleep. She will sleep on her own if fatigue is at 100.
Food – if the Food is at 0 the girl will need to eat part of the remaining food supply
Obey – what percentage change the girl will follow the assigned order out of 100. you can punish girls for not following orders. punishing girls usually makes their love go down bu raises obey to max. Obey gradually goes down if you assign the girl to do any except their favorite thing to do.

Orders:
Talk – talk to the girl, raises love depending on the girl. also learn more about their personality.
Free – allow the girl to relax.
Train – the girl gains battle stats as if she participated in a space battle.
Battle – engage the current enemy ship in a space battle mini game
Punish – punish the girl to raise her obey level, causes love to lower except Phia
Eat – eat food from the remaining Food Supply
Sleep – the girl sleeps to lower Fatigue
Sex – Attempt to have sex  with the girl. raises Jeo’s stats back to normal and causes the girls fatigue to max.

Enemy Ship
Gives the player a view of the current enemy ship and agent they are in range of.
Dossier – view information about each agent encountered.

Pilot information
Displays combat status for the current girl you need to give orders to.
Combat stats for all girls can be viewed by selecting “View Stats” from the right side of the Main Screen.
Pilot – gives a brief summary about the girls playstyle in space battles.

Mission Progress
Displays vital information needed to progress though the game.
Mercenaries – display how many mercs have joined Jeo’s team. An upgrade allows you to refresh your unit count with half the mercenary count instead of charisma if it is higher.
Resources(R) – displays how many resources the team has. This is used to upgrade and travel.
Area – show what space area location you are in out of 10.
Days passed – represents how many turns have passed.
Food Supply – the amount of remaining food. The girl will consume food automatically when their Food reaches zero. Keep the fodo supply up by pressing Make Food from the right side of the Main Scree.
Travel Cost – the amount of resources to move to the next area and advance the the next section of the game.

(Right side of Main screen)
Special Agents – Play a space battle as a powerful GemCo special Agent. Good to use if you are struggling with the four girls or want a easier time winning. Be sure if you use Jeo to recover is stats by having sex with a girl. Phia will always accept. More agent unlock as you progress though the game.

Make Food – Make food to replenish the Food Supply. cost 100 R
Research – brings up a screen where you can buy upgrades. Each research upgrade is describe on screen.
View Stats – view the girls and Jeo’s combat status.
Containment – certain NPC characters will appear here as you progress through the game.
Travel – Press this button to travel to the next area. make sure you have the required amount of resources. The space battle become harder as you travel to the next area. I recommend to get pretty pimped out in area 1/10.

(Save game, Settings & tutorial button)
brings you to a menu where you can adjust game setting if you are experiencing lag. Also has options to save and load the game as well as in game tutorials, including stuff describe in the walkthrough. 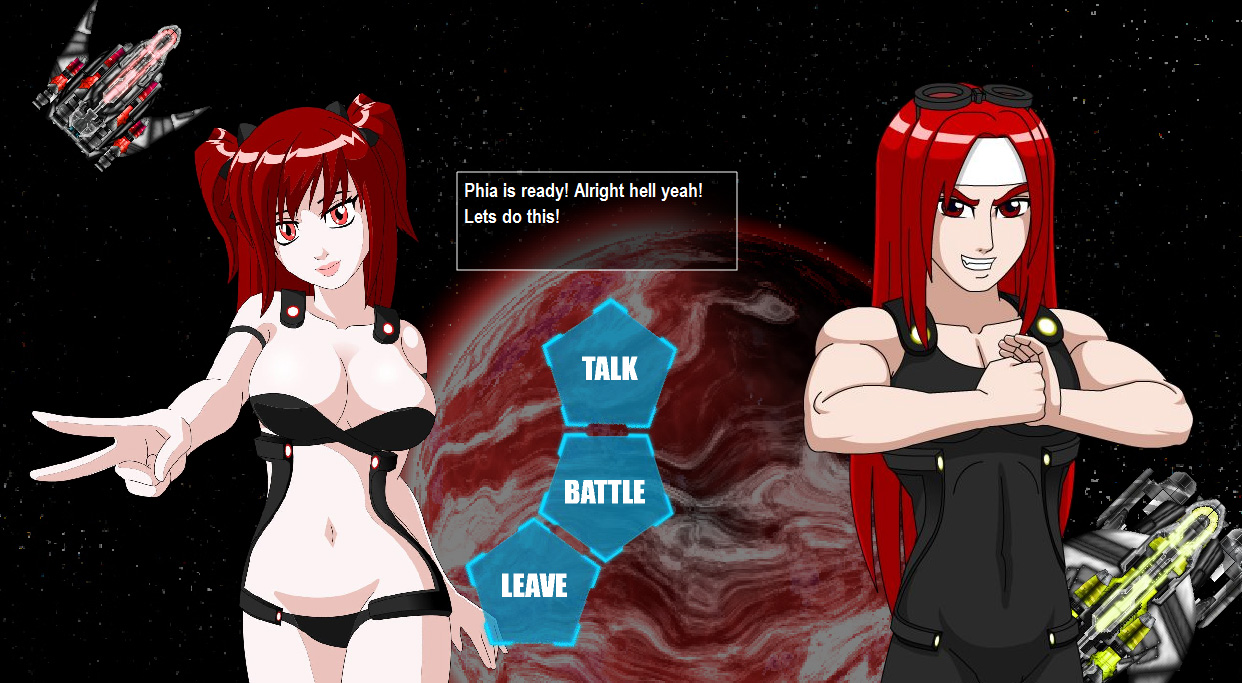 when a space battle begins you will first be presented with a menu to talk to the enemy agent, engage in a space battle, or leave. Press Battle to begin.

your objective in the space battle is to convert each circle or “node” over to your color. you do this by sending attack ships to the node to capture them.

when you send attack ships it depletes half of the remaining units in that node. if the units in the node become zero while you are in control of it it switches back over to a enemy controlled node.

if the units in your main ship ever become zero you will lose the space battle.

Each girl has a set of abilities, you want to be spamming the 1 key on the keyboard to replenish your main ship’s unit count. if that reaches zero you lose. the other abilities of each girl will be essential for winning the battle. each girl play differently, see the next section Skills for more on that.

Rally – Each playable agent has a common skill called Rally, this replenishes the unit count in the main node during a space battle. you want to use this ability as often as possible.

Arielle – powerful laser damage and offensive skill set
Assault – press this skill then select a target enemy node to reduce the units in that node to zero. this

makes it much easier to capture nodes when you send a attack ship to it because the number will be zero or low if it hasn’t been reinforced by enemy attack ships yet.
Mega laser – Arielle fires her main cannon wiping out all enemy attack ships and lasers in it’s path.

units in it. seduce will instantly send units back to Phia’s main ship to reenforce it.
Revolt – causes nodes that are less then her charisma skill it instantly switch to her control. also send

ships back to the main ship/

Tiffany (TT) – super tanky
TT has unique passive. When she controls no other nodes besides her main ship, she will spam lasers at all enemy nodes at once. so you want to hold out as long as you can at the start of the battle with taking any nodes. do this by using her abilities reinforcements and shield.
Reinforcements – raises the unit count in all controlled nodes including the main ship.
Shield – puts a shield around all controlled nodes including the main ship that absorbs enemy laser fire. 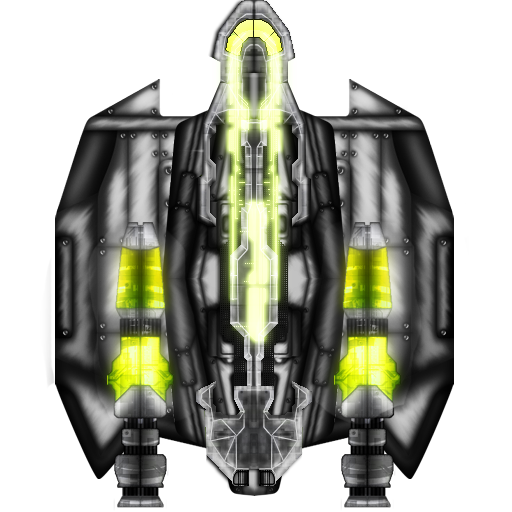 Main enemy ship – Can be seen from the Enemy ship panel In the Main Screen. this opten shoots a single laser and sometimes releases a enemy attack ship. some variation of the have a spread shat that targets all player controlled nodes.

Boss ship – just when you think you have captured all nodes there is a chance the boss ship will appear. This ship automatically reclaims nodes for the enemy and send out attack ships and shoots lasers at you main ship and your lowest controlled node. this ship brings in a additional node that need to be captured also. Capturing the boss ship node with stop it from shooting lasers and sending out attack ships.

there are many ways to play this game and get resources.You overall goal is to win space battle to gather resources and travel to the next area. The easiest way to do this is to jsut use Jeo and other special agents to do all the space battles.

AREA 1: pretty standard area, in the area I recommend you battle enough times to buy all the Research upgrades, thus preparing yourself for the rest of the space battles and making sure you will have plenty of Resources to Travel. Start by maxing out Recource gathering the get the rest of the upgrages, once you have them all travel to area 2. Arielle will have a quick conversation with Jeo.

AREA 2: the enemy ship shoots out a spread laser. this might be a problem if a assault ship is there plus a reinforcement ship and a boss ship. to ensure a smooth battle jsut go with Jeo. once you have enough money travel to area 3. Phia will talk to jeo about the next enemy agent ship.

AREA 3: this battle can be avoided by using Phia to space battle. Give Phia a Battle order and Use the talk option before the battle starts as phia. after the other girls complete their orders you will return to the main ship and can travel to the next area for only 100 R. TT will talk to Jeo about a container she found in containment that she in unfamiliar with.

In this area you can also use phia here to skip the space battle the say way as in area 3. after, you can travel to area 5 for only 100 R. or you can destroy the enemy chicks soul with 2k stats Jeo. up to you. after go ahead and travel to area 5. Bri will talk to geo about a special agent who is a playable character in space battles and will unlock more sex scenes.

AREA 6: Amp joins you but you still need to defeat her in a space battle to prove your skills. Meanwhile you can also sex up your new futa lover Remi. by click special agents. Amp can be found in containment and has a dialogue with goo. in space battles Remi is a powerful version of Phia. once you beat Amp travel to area 7. Luma and her crew will show up.

AREA 7: send any agent to space battle and use talk to skip it and travel for only 100 R.Arielle talk to Jeo about Yui. Also Luma becomes a playable special agent in area 8. Luma is a powerful TT.

AREA 8: beat Yui and travel to the next area. I recommend Luma. Jeo will talk to Cain.

AREA 9: beat Cain and travel to the next area. Jeo will talk to ???

AREA 10: Only Jeo can fight against the boss. So pick Jeo and go win. once you beat him travel to the next area to finish the game.