UMAA custom backgrounds in the works

In past Umichan games I used royalty free backgrounds, but those don’t have a top down view I would need for the shooting minigame and sex animations. I would have to cut out parts and try to make a top down view myself. I’ve done different angles like this before. the sex background in the cafe in UMCH was made from edited parts of other backgrounds, also a few other sex BGs. Also the fitness center in sentoryu.

However this time I will commission the work from https://twitter.com/badrielfun
who from what I can tell has done some backgrounds for for the winged cloud sakura games. So hopefully all this stuff will turn out good.

But this will not only be for top down stuff, I wanted the entire GemCo academy to be custom made. below is a sketch I made to help visualize the idea I had in mind for the school exterior. It will also be used to select which part of the school you want to go to. 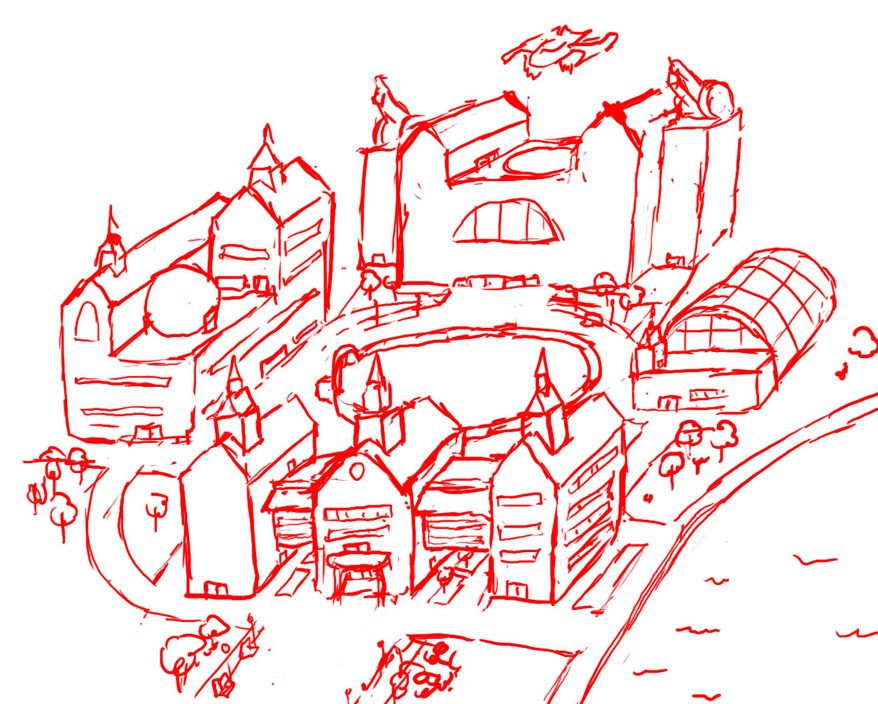 the front building the main school that has the classes. In reference, this is the only part the Rookie goes to in the Rookie VN game.

Behind it to the right is a pool. The idea of the academy having a pool was introduced around the same time the nanako vs academy girls swimming game was introduced.

The back building is the combat training facility. This where the rookie would have gone in a hypothetical day 3 scenario. As reference, the battles in the Agent Trainer game happen here. When you are in the classroom it is assumed to be in the main front building though.

and the left building is the science building. Science here being mostly about, khalei infusion, robotics and and how they are powered from khalei crystals, agent gear, etc. I’m thinking about having medical stuff here also but I’m not totally sure yet. I didn’t plan to have any secret GemCo experiments going on here as the purpose for the school is training/educating agents. I wanted to make sure to distinguish this school from a actual GemCo base.

the middle circular part is a hologram dome. I wanted to add this in the event i wanted to add some locations/areas/scenes that don’t really fit.

Hologram technology can be found in ARIA. The Holodeck in ARIA is a compartmentalized version of this larger dome and is on some the larger gemco spaceships. in ARIA, the idea is that you are playing a hologram replay of the sex scenes.

13 thoughts on “UMAA custom backgrounds in the works”