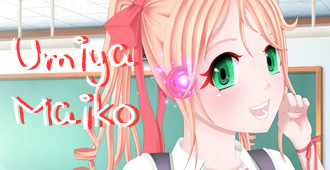 Maiko is an easy going girl in high school. Many of her school mates in school see her as a dork in school. She is a geek in a sexy girls body, one of the reasons why so many dorks are in the Game club. She didn’t even have to try to make new members to join. She is a popular girl with geeks. Most of the time she is with geeks, one of her best friends in the club is Chris. Her best friend is Riley a very studious and popular girl in high school, and a member of the student council.

On the second day school Maiko walks to school with Riley and meets up with Chris along the way. Right outside the school entrance, Maiko wasn’t watching were she was going and bumps to Luma’s jock boyfriend Joiry. Being the jerk that he is, he attempts to push Maiko to the ground. Maiko afraid of being pushed by Luma’s boyfriend could do nothing but brace for the impact terrified. Upon making connection with Maiko, all his energy was sapped in an instant and Maiko was effortlessly able to block his attack and push him to the ground. Furious he regained his composure only to be held back by Luma. She had suspected something of Maiko that none yet understood. She convinced her boyfriend to drop the tantrum he had, and made fun of Maiko calling her a nerd magnet, a dork, and that she will never be popular, just to appease her boyfriend and nearby popular students. Maiko decided that day she’ll prove her wrong by doing whatever it takes to be popular.

Maiko has a Hairpin containing a Saboteur Khalei Crystal. She is uncertain why she has it, but she treasures it the most out of all her other possessions as it was given to her by an oracle named Annie. None of her friends believes this story. Having worn it nearly every day, she eventually starts to be able to manipulate the Khalei contained inside of it.

Maiko’s Kahlei is rather unique as opposed to the normal properties Saboteur Khalei tends to take. When she absorbs enough energy she can summon weapons from an ancient source.

One night Maiko absorbed too much energy in an attempt to save her own life and the crystal exploded next to her face. This jarred her memory but allowed her to use her abilities without the use of the crystal and use much higher levels of Kahlei. Maiko is one of the few people that can manipulate natural Saboteur Khalei. It would normally kill the user.

Later in a selfless act to save Gheist’s and many others lives, she nearly died after her entire body exploded by an overflow of Kahlei. Chris managed to get some cybernetic parts, from a mysterious source that he can’t remember. These parts allowed her to be stronger, faster, and smarter than an average person. It’s was everything she had wanted, the only problem was she now had little to no memory of her past life.

Gheist and the others she saved that day often time calls Maiko, Charity as a nickname. She takes upon that name more often later in the story. Later Maiko searches to find out about her past. And what happened to her past rival Luma, and her old friends. Later after she reveals her past and regains her memory, she travels back to the past to change the outcome of the fight and secretly saves herself and the others without destroying her body. After that Maiko becomes weaker than she was as charity, but Gheist and others still began to call her Charity. The new Maiko doesn’t have cybernetic parts but can power up for a short time to have power equivalent to what she had as a cybernetic Charity.