Recently I have explored making 360 3D videos with MMD. 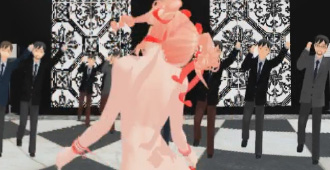 if you have a smartphone it is also possible to view this on your phone and rotate the phone around to view it.
or you can use your phone as a VR headset.
https://www.google.co.uk/get/cardboard/get-cardboard/

to view these on your phone download homino player app, it is both on apple itunes and google play store:
https://play.google.com/store/apps/details?id=com.homido.homidoplayer&hl=en
https://itunes.apple.com/us/app/homido-360-vr-player/id909196467?mt=8

If you have android you can also download this one if you want:
https://play.google.com/store/apps/details?id=com.appinhand.video360

next you need to download the videos I made, here are the links
There are two possible links for each video:

after downloading the video open them with the app.

In homino player:
Just press video player
then click the folder in the top right corner and open the video file.
if you don’t have a VR head set for your phone turn off SBS.
to get rid of the black box just press the X the the top left corner. touch the screen to bring it back.

if you don’t have a VR head view as normal 360 video.
if you have a headset for you phone, view as VR video.