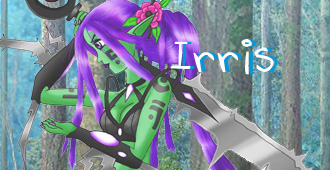 The young and gifted enforcer of rules and executioner of a group of creatures that exist in a deep ancient woods in Annie’s home world in alternate dimension reality in a kingdom known as Icondra. She was brilliant sorceress that could turn fire into healing flames or make them hellishly more intense. Charged by her people with keeping order from anomalies from different realities, this was a title known as Zxia, or grand judge. She also had five Icondra judges she commanded. She often went by her title and not her actual name. And she was very harsh in casting judgement of others.

The Icondra race of creatures stay far away from the churches. She was commonly known by the Clerics as as the Icondra blade witch and cause fear amongst the ranks of the clergy and priestess. Icondra originally created the Blade Staff weapons and are the masters of using glyph tattoos to enhance their physical and Khalei powers. They also had several terminologies for things later adopted by the clerics.

Irris, unknowing to her, was framed by Annie’s father resulting in death by her own people. He had killed all of her five judges and blamed it on Irris. He did this to restore order among his congregation and remove their fears, and claimed it was an act of the divine giving him power. Unknowing to him, Icondra who do not die naturally become demons before they can killed off once and for all. Irris’ maddening revenge and wanting justice for her framed death, slaughtered many clerics before being banished to the white world by the divine high priestess Rayel. Rayel also banished the other icondra that had become demons. In the ancient Icondra text, they have a very specific name given to a Zxia who becomes such a extremely dangerous demon, a Semitix. The other demons in the white world still even in death think Irris killed them, and they war with her and disagree with her all the time. The living Icondra also believe Irris murdered her own people.

Irris, still brilliant in death and trapped in a infinite dimension of nothingness, sees Donavik as a means to find justice and find who framed her. She manages to create a link between her and him from the white world, a portal. and decided he would be the sixth of her jury so he could judge others. But in order to leave the world permanently and travel and restore her original form, she needs a unique kind of natural Khalei. A little girl named Gheist was born with such a gift given to her from a Cia spirit. It is common knowledge among the upper rank of the church that natural Khalei normally kills demons. But unknowing to Annie’s father the Semitix is was no ordinary demon, born from a not so ordinary Icondra. And he let is daughter Annie and her new special friend Donavik leave from his grasp in front of the Church carrying the “taint” known as the Semitix. which comes back to haunt him later in a very serious way.

However even as a demon Zxia, Irris still judged other creatures she saw as a threat.