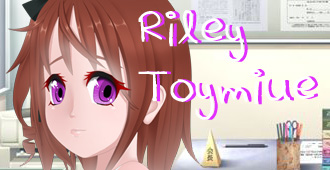 Riley was part of the Student Council and used her smarts to help make sure Maiko’s plans worked out. She also spent time helping Maiko study. During the time she spent helping Maiko, Riley was given an hairpin containing a Enhancement Khalei Crystal by Annie. Annie had tried to prevent Riley’s growing focus on Maiko’s hairpin by giving Riley her own hairpin. Riley had always wanted a Khalei hairpin ever since she noticed how Maiko was using her hairpin to do stuff that she normally would not be able to do otherwise.

Riley didn’t wear the hairpin much during the day, but secretly was mastering the powers that the Enhancement Khalei provided to her during the night. It gave her increased speed, faster thinking, and eventually she could form the Khalei into weapons and auras made from Khalei. Eventually, she started wearing it publicly.

One night she was supposed to meet with Maiko, but Maiko never arrived. Riley was attacked by sentinels that night and nearly died. She became slightly bitter with Maiko because she thought Maiko didn’t show up because she was meeting other people to try to get popular with them. Later Riley began to think all the popularity was going to Maiko’s head. By then even Luma had recognized Maiko as a full on rival. Riley began to grow jealous, bitter and began to grow distant from Maiko. She became so bitter that a shadowy clone of Riley manifested itself from her during her sleep while she was having a nightmare. Riley had no clue about this for while. This shadowy clone of Riley born from Riley’s twisted Kahlei was faster and smarter than Riley but less powerful.

Later on after Pattie came and told Riley that Maiko was in danger, she refused to help until she learned Maiko hadn’t shown up that night because she had gotten attacked that same night herself, and didn’t tell her. As Riley and Pattie went to go help Maiko she was nearly killed by her own clones. Several clones were attacking both her and others in other places such as a pivotal young girl named Gheist. Riley was having an extremely hard time fighting the clones of herself and try to keep Pattie safe because all she wanted to do was apologize to Maiko and try to save her.

After finally reaching Maiko it was too late. Maiko was unconscious and nearly dead. Riley mustered all of her remaining power to help Sixxe and Annie. Riley fought hard but didn’t live actually saving Sixxe, who wasn’t paying attention to stuff going on behind him. She died thinking Maiko hated her. Later, after Maiko remembered her past she went back in time to save herself, but more importantly, to save her best friend Riley.

One thought on “Riley Toymiue”