Hey you know what’s better than one Maiko? just kidding. I got home late today and instead of working on ARIA, I spent some time tweaking the boob physics on the Maiko MMD model I have been editing for a while now. I am close to finishing but it won’t be perfect, simply because the physics don’t allow for big boob characters. There really no way I can see to do it where it doesn’t have tons of flaws. I will explain for those not familiar with MMD. Basically there are only 3 physics body shapes. as seen in image A.

Basically the thing to take away from this is sphere is the tits. Two spheres to be specific, for obvious reasons. The problem will all the physics in general is that they are all rigid and don’t deform if they collide with one another and seen in Image B,

Basically the common way they are weighted to a bone is the with a smooth and even gradient. It causes the boobs to deform in such a way where they point out. I tried to illustrate below.

Since the only thing that is weighted the most is the tip where the nipple is, the only main thing that follows the physics sphere as is moves and bounces is the nipple.. The other parts of the boob does also but the pull is not as greats because the weight fades the closer it is to the torso.

The problem here is that when the breast moves as it collides with other things it remains full and solid almost looking fake because they appear too solid and not deforming at all. even incorrectly.

So which is better? I think I’ll go with D because while it looks more solid then it needs to be it also look like you are going to get you eyes poked out. I made a video to show the differences. Like I said, both have problems, and you you can’t really do much about it because of the way the MMD physics are. Also keep in mind that for small boobs C works perfectly fine. And D works well in some cases. It’s when you starting getting to big ole’ phat titties that you run into deformation issues.

Update #1: Ok after doing a bit more study I think I have crafted something I like. Even did it with just the one bone. For purposes of description, I will call it “E”. It is not really a combination of C and D it is more like a modified version of D. I actually did something that at first (to me) makes no sense until you actually see the results then think about it and then starts to make sense.  I put most of the weight at the top of the breasts. What it does is allow the boob to compress and expand while also rotating and moving along the axis. The drawing and video is below. 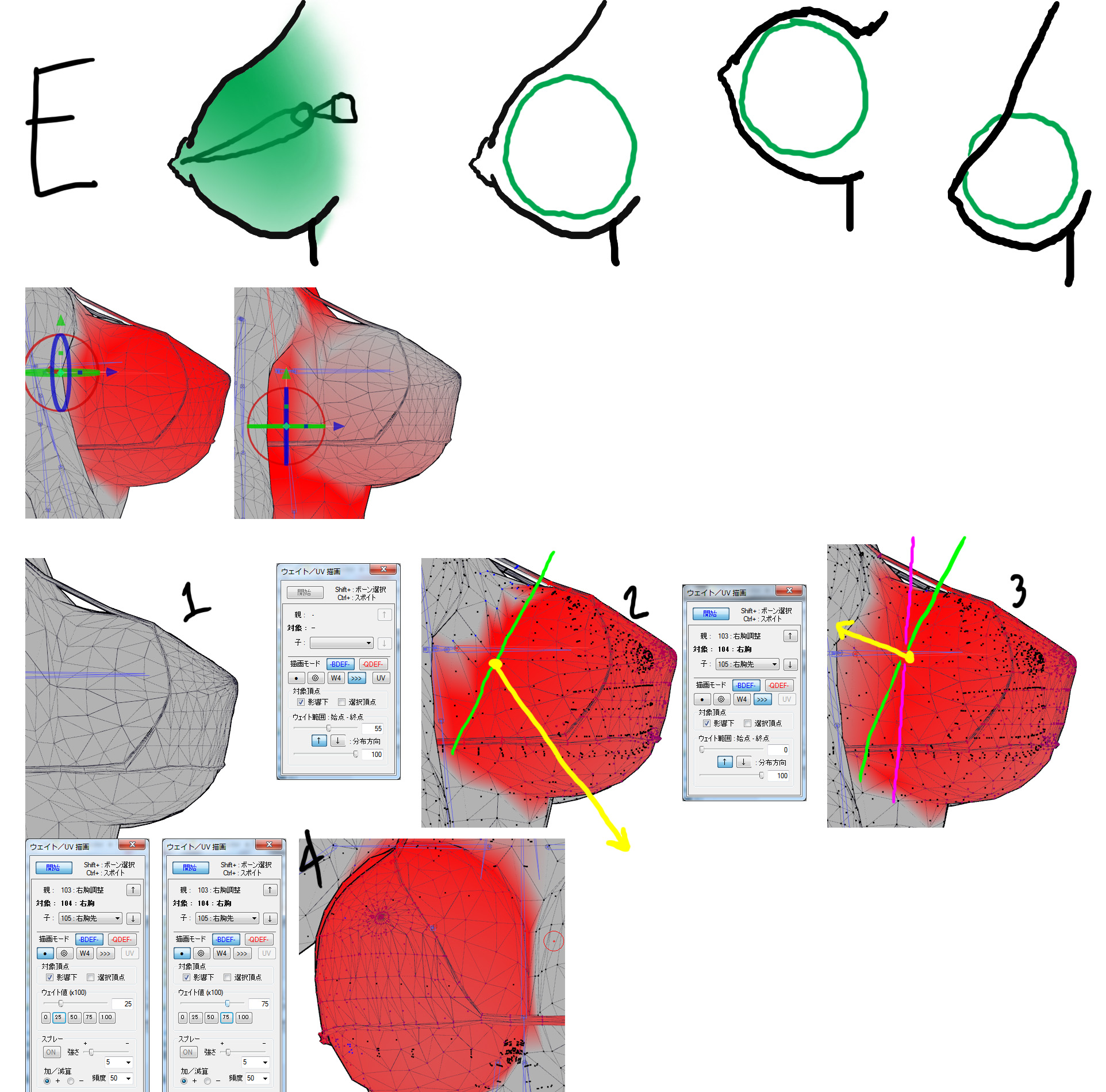 as you can see. no weight is below 50 for under the breast. It goes down to 10 just to fade out the edges.