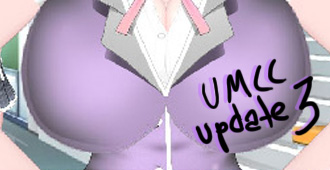 I need to get away form bandcamp because the more people that get it there the harder it is to distribute. Keeping up with a growing e-mail list. Please use patreon. This is at the 1$ tier level. I need to make some changes there but I haven’t gotten around to it yet because I have been working on the games and stuff.

If you bought the game for $7 on bandcamp and don’t want to use patreon send me a message and I will get the game to you directly. this will be last update for bandcamp stuff thoguh. Actually this will be the last anything for bandcamp heh. I will just have the music there only and use it for very situational things.

a boob size larger then jumbo. use: “omfg” for the boob variable (2)

added a variable in tablet Config screen where Maiko can exit to the gym while being nude and can take off shirt anywhere. (1)
this variable does not get saved in saved variables, also note that Maiko will still want to put oh a shirt at certain points.
In the past walking around nude was a bug and I had added in all kinds of ways to correct this.

So what is next after version 3?

So the next version will be a little different. It will barely have any additions to the main game. However the biggest thing will be a “sandbox” separate from the main game file that just contains all the H animations and stuff in it and you can mix and match characters. it could have even more than what it is in the main game. It will still have the dialogues. I also plan to have the custom characters in the sex stuff, but the might start out as some separate also. I will start with pleasure service 1 just to test it out. I want to separate things out because the main game is very heavy. I have almost have 2000 art resources in there so it takes forever to save and compile. Of course no one playing the game would notice. But it wold make a my life a bit easier on this. Since it is a sandbox I won’t care as mush for thing like futa and such if that is what you are into.

I’m not sure of the sandbox will have a theme to it. Like some hostess. Not too different from the sex club, just a character standing there and some options, and maybe you can see stuff happening in the background instead of just a empty room..Or it could be just options and buttons to select things.